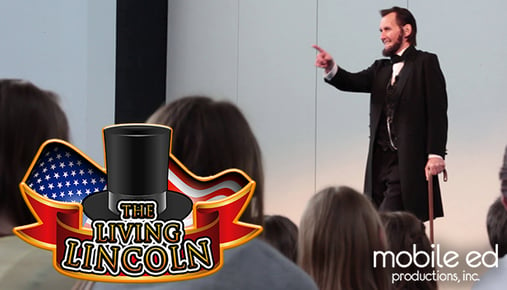 This excellent historical program has now been presented in thousands of schools across thirty-five states from New England to California. Besides elementary and secondary schools, our stunningly realistic-looking Abraham Lincoln impersonator has also performed in retirement homes, libraries, and even for the inmates of a county jail or two.

In schools, our presentation of Abraham Lincoln lasts approximately 45 minutes, and comprises a chronological first-person narrative of his life from his humble origins in the backwoods of Kentucky through his trying years in the White House. This show's content can be adapted to the age of the audience Mr. Lincoln is addressing. Drawing on in-depth expert knowledge of this subject, our performer will provide an educational odyssey that is often humorous while at other times extraordinarily moving. During portions of a performance for older grades, it is not uncommon to spy a few moist eyes in the audience. Mr. Lincoln serves as an excellent role model for students of all ages! Expect the shelves of your media center to be emptied of related books following this program.

A very popular portion of Mr. Lincoln's visit occurs after the formal presentation when the actor fields questions from the audience. You may wish to allow additional time for your students to take full advantage of this segment, as there are always more questions than time allows. If desired, schools may wish to schedule a full day with this program, allowing for additional informal classroom visits to follow the actual assemblies. 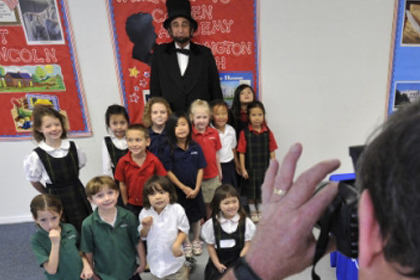 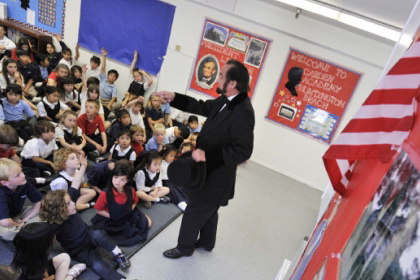 You students will always remember the stories and lessons of The Living Abraham Lincoln. Get a taste of living history in this short video!

Articles about The Living Lincoln

On April 15, 1865, President Abraham Lincoln passed away in a small room in the Peterson boarding house across the street from Ford’s Theatre in Washington where he had been shot the night before. This is fact.

On April 15, 2011 a new film opens, directed by Robert Redford, concerning the events around the trial of those accused of taking part in the conspiracy to assassinate President Lincoln. The film examines in particular the guilt or innocence of Mary Surratt, convicted as part of the plot and the first woman ever executed by the United States for treason. This, also is fact.

But the film, like so many other Hollywood films before... read the rest of the article!

Our resident author, Geoff Beauchamp, writes blog posts exemplifying the talent of his co-workers and the importance of the school assembly programs they present. The humble Mr. Beauchamp never writes to exemplify his talent. This blog post will do what has never been done before, praise Geoff for his dedication, hard work and inspiring performance as Abraham Lincoln.

Geoff is a professional actor with 30 years of experience in film, television and on stage. He has worked for Mobile Ed for the past 20 years helping to create "Education through entertainment." Geoff created and still performs our program, The Living Abe Lincoln, which is one of our most popular school assemblies. In his role as Abe Lincoln, Geoff teaches students, and even teachers, about the life of one of our nations most influential presidents by exposing Lincoln's humble beginnings and the emotional journey through presidency and assassination. Recently the students at Sanborn Elementary in Ossineke, Michigan ... Read the rest of the article!

School Assemblies, Abraham Lincoln, and “A New Birth of Freedom”

Today is April 12, 2011. It is also exactly 150 years since a momentous day in the history of our nation. Exactly 150 years ago, on April 12, 1861, in Charleston, South Carolina, shots were fired on a small garrison of United States military personnel stationed on on island in the harbor called Fort Sumter.
Whether or not you consider this a great day of shame or pride, may be a matter of where you call home, but it cannot be denied as a defining moment in our history.
On that day began what we call the Civil War. Some call it the War Between The States. Others call it the War of Northern Aggression. Whatever you call it, the war that followed today's actions 150 years ago defined our country in the eyes of the world and... read the rest of the article!