Flooding in Australia – International News and The Earth Balloon 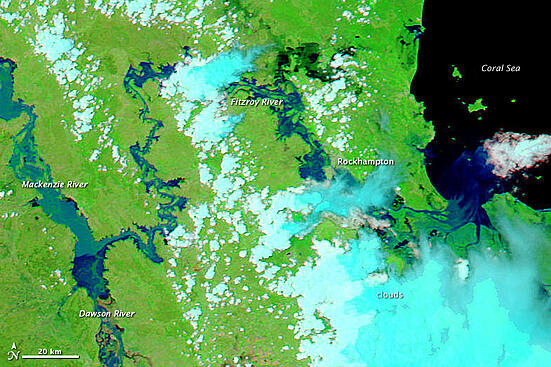 Here is something current. In Queensland, Australia, recent flooding caused massive evacuations and covered an enormous area with deep water. The water damage will run into the millions of dollars, and was responsible for some loss of life. Overall, it has been a huge and unprecedented tragedy. An early article from the NASA Earth Observatory (http://earthobservatory.nasa.gov/NaturalHazards/view.php?id=48420) shows some amazing photos of the affected area. All this reminded me of the mind-boggling technology available providing these simply awesome satellite images and how they contribute to our being able to understand the magnitude of our planet in ways previously unimaginable while at the same time bringing everything closer. Google Earth alone stands as one of the most incredible tools I have ever seen for teaching about our planet. Even your aging writer continues to marvel away hours with that toy!

Well, what does this have to do with school assemblies? Kids today have these great tools at their disposal, but to many, anything on a computer remains somewhat akin to fiction, as does anything on television or in video games. There is a great sense of unreality born from hours at the video game console. They are not really guys we are killing or cars that are crashing, and so there is a sense that anything on “the screen” is still detached from the real world in which kids live. 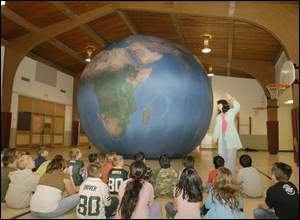 Which is why it is so cool that there are some great educational school assemblies available to help bridge this gap in perception. Take the scale of the planet for example. When kids look at a basic map, it is hard for them to mentally connect the small flat image with their perception of reality. But give them something like The Earth Dome (aka The Earth Balloon) and that changes rapidly. The Earth Balloon is a gigantic planet Earth. Thousands of high level NASA images taken in high resolution from the Space Shuttle have been seamlessly merged to form the skin of a huge inflatable Earth that stands close to twenty feet tall. The detail is simply amazing. A skilled presenter leads students around the Earth Balloon teaching them all about the geography of the planet, the relative depth of the atmosphere, weather patterns, ocean currents and also about the internal geology of our world. 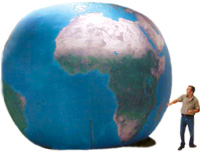 And standing next to this massive representation it is impossible to miss, for example, the scale of the Pacific Ocean, or the relative size of Africa compared to North America. These are things you simply cannot imagine or accurately gauge using a simple flat map. And kids get it! And they love it! And the next time they look at a flat map, or an image on Google Earth, they see it in a completely new and different way. They are able to imagine the distances, and the heights like they never could before.

So if you are looking for science assemblies that will really grab the imagination of your students, and allow them to see our planet as never before, you might want to check out the Earth Balloon. Then go back and take a look at those pictures of Queensland. You may be in for a shock!