Wow, the English are beating us into space. Seriously! No, I don’t mean officially, with rockets and astronauts and stuff. I mean ordinary people! 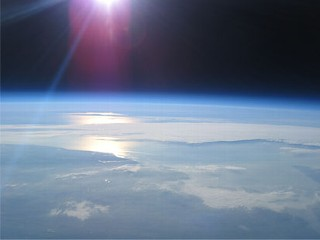 It seems that ordinary Englishmen have been sending balloons carrying cameras up into the Earth’s atmosphere using home made equipment and retrieving the most amazing photos. These “earth balloons” cost very little to assemble but are truly innovative.(http://www.channel4.com/news/students-film-earth-from-space-via-a-balloon) Recently, two Sheffield University students, using only a weather balloon carrying a foam container containing two cameras and sealed with duct tape, were able to film the Earth at the very edge of space. This is some of the most awe inspiring footage I have ever seen. Simply fantastic! After the balloon expired, the cameras were carried gently back to Earth by parachute and retrieved using a GPS unit. The videos they captured with this “Earth Balloon” are truly amazing! But another Englishman has been conducting similar “Earth Balloon” exercises for some twenty years, using weather balloons launched from earth in England to carry simple still cameras aloft. (http://abcnews.go.com/Technology/balloon-camera-duct-tape-shoot-earth-pictures-space/story?id=10210658)

The ingenuity of humans is amazing when it comes to earth and space. These “Earth Balloons” have allowed ordinary people to glimpse the edge of space and view the surface of the Earth as never before. Actually, even this seems like a lot of trouble. It really isn’t necessary to send a balloon into space to see the surface of the Earth. Mobile Ed, in fact, can bring the Earth itself into your school with The Earth Dome (AKA The Earth Balloon).

This fantastic science assembly program features an Earth balloon which is twenty feet tall, and is composed of thousands of high resolution photographs of the Earth’s surface, taken from the space shuttle and seamlessly integrated by computer to form an unbroken and highly detailed surface to the planet. With a visit from this Earth balloon, schools may introduce children to all the wonders of planet earth as seen from space. They learn all about the Geography, Atmosphere and Geology of our planet in a truly exciting and motivating science assembly.

So while we applaud the ingenuity of our English friends, we feel that our Earth balloon is perhaps a little easier to use and less complicated than their “Earth balloons”. Next time, maybe they should just call Mobile Ed and save a lot of Duct tape!