A Great School Assembly Performer is Headed for Texas! 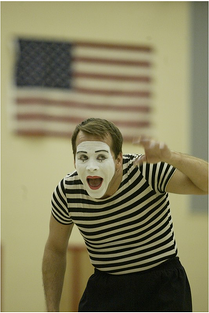 I have written before on occasion about a good friend and a truly magnificent school assembly performer, Toma the Mime. Toma was recently at Fisher Elementary in Speedway, Indianapolis. I just got off the phone with Kathryn Richards the principal there, and ... wow!
Fisher has had many programs from us over the years but in the past they have always favored the living history characters like Lincoln and Martin Luther King. And they have always loved them! But they had never seen Toma before. Toma does our Young Author's Day school assembly. And he is really good! Ms. Richards was so excited she could hardly finish her own sentences! She told me of veteran teachers who, prior to the show, were skeptical. What can a mime teach about writing? But after Toma had finished his school assembly program, the same teachers were beside themselves with excitement! The school uses the 6 plus 1 traits of writing plan and works very hard at it but had not found the “spark” to get kids interested in it. Ms. Richards told me in particular about her sixth graders and how they are usually too “cool” for school assemblies. But after the visit from Toma, these same young people were bouncing off the walls with excitement! Now the school plans to have Toma back every year as the very “spark” that was needed.

One last anecdote she shared with me. One particular student was so impressed with this school assembly that he went home and was up for hours reading and sharing in the stories posted on Toma’s Facebook page. The next day he told his teacher about his night. The teacher couldn’t wait to tell Ms. Richards. This particular student has learning disabilities and normally struggles with even the simplest of reading tasks. And yet this same student not only spent hours reading postings on Tom’s site, and posting some himself, he could not wait to share his experience with his teacher the next day! So.... just what can you learn from a mime? A whole lot it would seem! Kudos, Toma! 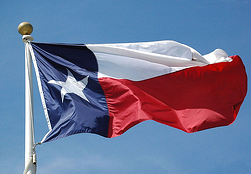 Well, I said this was about Texas school assemblies, and so it is! As I write, Toma is en route to Texas to spend a few weeks introducing students there to the joy of writing and creativity. There are still a few dates left open in his schedule, so if you represent a school in the great Lone Star State, and could use a little help in the writing department, give us a call. We have a school assembly tailor made for you! But don’t wait. Toma won’t be in Texas for long!

Here is some additional information about Texas school assemblies!