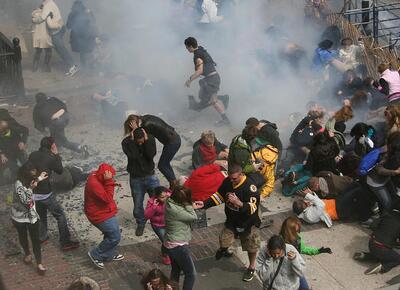 When the bombs went off at the Boston Marathon we lost several lives immediately, but we also experienced more than 200 casualties, people wounded or injured in one form or another. Because of the nature of the explosive devices used, many injuries were to the legs of people near the explosions. Some fifteen people lost limbs in the bombing. Celeste Corcoran lost both legs and her daughter, Sydney, was also injured.

This morning NPR ran a piece about Ms. Corcoran that caught my attention. In it, Corcoran spoke about the horror of learning she would lose both legs, and how that affected her outlook on life. What I found utterly amazing was her retelling of how within days she was visited by a U.S. Marine by the name of Gabe Martinez, a veteran of Afghanistan who lost both legs from injuries similar to those sustained by her. Martinez belongs to a group of amputees called the Semper Fi Fund, who take it upon themselves to counsel injured servicemen. “Steady as a rock” on prosthetic legs, Martinez was able to uplift her spirits and prove to her that she would not only recover all aspects of her abilities, but in some ways actually be better than before. 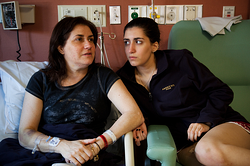 The entire story was emotionally charged on several levels, from her confessed trauma over her own injuries combined with the worry about her daughter, to the selfless gallantry of the Marine in volunteering to assist. There are still real heroes in this world.

But, on another level, I came away with more than that. I came away with a new appreciation for the myriad ways in which technology has risen to our aid during the wars in the Middle East, in terms of coping with the after effects of war, but also in translating those advances into benefits for our entire society.

The recent brutal wars in which our country has engaged have produced a staggering and horrific number of injuries which in previous encounters would have proven fatal but from which our servicemen and women are now not only surviving, but, in many cases, going on to lead normal and productive lives. Advances in medical procedures, along with corresponding advances in technology, have saved hundreds, perhaps thousands of lives. The technology now available, in terms of replacing lost limbs, is utterly amazing and quite staggering in light of the compressed time frame in which these advances have occurred.

As an amateur historian, I am well aware that amputations have always been a horrible side product of war. In the Civil War more lives were lost in the hospitals than in battle itself, due in large part to the lack of knowledge available at the time dealing with how to handle wounds. The simple and most often employed procedure for arm and leg wounds was amputation. At the end of the war thousands of young men (the ones who did survive) returned to their homes hobbling along on crutches and a missing limb. Even World War One produced a staggering number of similarly deformed survivors.

But today, due to awesome advances in technology, the option is available to amputees to not only replace missing limbs with new prosthetic limbs, but limbs which sometimes are capable of performance superior to that of the natural limb they replace. Amazing.

Here is a link to the NPR piece.

And here is one to an article about the Marines who give their time to help.

And lastly, since this is a school assembly company blog, here is the obligatory “pitch”. :-) 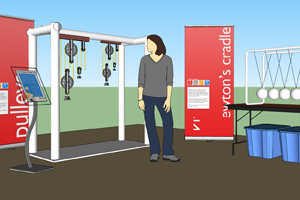 With so many careers projected in future years in the fields that produce these advances – Science, Technology, Engineering and Math, educators are pushing for an expanded presence in American education featuring these fields. In response, Mobile Ed has created The STEM Museum, a day long, hands on school assembly event for elementary and middle schools designed to expose students at an early age to the wonders and complexities of these fields in a way that will motivate them to pursue further education, and possible career choices. We are extremely proud and excited about this new school program and feel certain our client schools will share out enthusiasm. Have a look and see if we can bring this amazing program to your school. Maybe, in a few years, it will be these children of today producing the breakthrough advances of tomorrow. End of pitch.  :-)

In the meantime, please visit the links above and learn about the ordeal of Ms. Corcoran and her family, and also about the heroism of the Marines who assisted her. It is a story that needs to be told, and one in which you will undoubtedly find inspiration. I know I did.