OK, so for those of you who noticed, we managed to skip January with our School Assembly Dog of the Month, so we will forge ahead into February a day early!

The new School Assembly Dog of the Month Award for February goes to a real canine star! This month we feature Uggie, the costar of the recent hit movie “The Artist”. If you have not seen the film, you should! It is a wonderful tale of Hollywood actors in the days when Silent Films were being overtaken by “talkies”. Uggie , a Jack Russell Terrier, plays the side kick to the star actor both on and off screen in the film, and at one point, literally saves his life! Uggie has been nominated for a prestigious “Golden Collar” award for his work in the film. 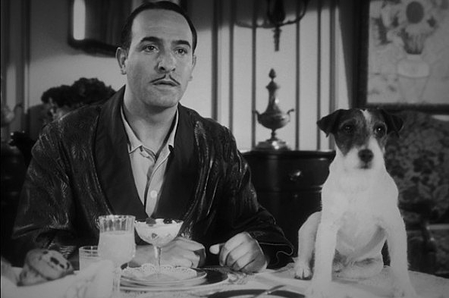 None of this is new, of course, for Uggie, who has worked in many films and received awards for his work before. But this magic moment marks the end of a career for Uggie who has announced through his spokesman/handler that he will now be entering his retirement, in order, we are certain, to “spend more time with his family”.

Ironically, Uggie almost never made it out of his early life. A resident at a shelter, Uggie was rescued and fostered, finally proving trainable enough to be able to act in films. 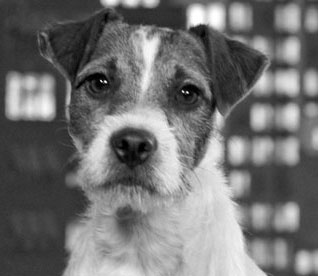 But, as you can imagine, he left behind millions of other equally deserving dogs and cats who will never be rescued, and many of whom will, tragically, face euthanasia.

Mobile Ed’s school assembly Animals and the Environment teaches kids in schools across the country about threats animals face from a number of environmental sources, from poaching to habitat destruction. But we also try to teach kids the responsibilities that go along with pet ownership.

So here’s to Uggie! Bu, also, here’s to all the other wonderful dogs and cats just waiting their turn in shelters all over this country. May they all be as lucky as Uggie!