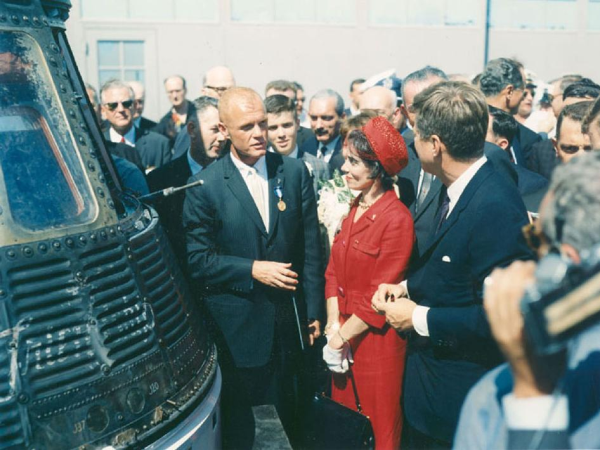 I came across this picture today. It shows a very young astronaut named John Glenn standing next to one of the early space capsules that took our brave young pilots into space for the first time. He is in the company of President John F. Kennedy and his wife, Jackie Kennedy. For those too young to remember, those were heady days filled with excitement, energy, enthusiasm and pride.

Today, of course, our fleet of space shuttles is now retired and the future of NASA is in doubt as more and more initiatives for space endeavors are shunted off into the private sector, for good or bad yet to be fully understood.

But I feel bad for the young of today who no longer have the front page headline news of breakthroughs in space exploration to excite them and motivate them toward careers in science and engineering as we had then.

Which is part of the reason I am so pleased that we offer our mobile planetarium, The Sky Dome Planetarium. This awesome piece of high tech wizardry employs a state of the art digital star projector capable of simply stunning space age computer graphics to be projected on the inside of a huge silver dome in order to dazzle and inspire groups of up to a hundred students at a time. And because it is a portable planetarium, this inflatable dome school assembly is available to inspire students in schools all over the country, both urban and rural. Our mobile planetarium ( actually we have several!) hits the road every year to travel all over the country, from New England to California.

With this technology available, we believe we may play some small role in helping to inspire future scientists. Every day we hear from adults who call to schedule the program for their kids but take the time to inform us that they “still remember seeing the portable planetarium with the big silver dome” when they were young. It is an experience never to forget.

Of course, our current planetarium is a vastly improved experience over the old Starlab planetarium we used for so many years. In it’s day that technology was a boon to be sure, but the new digital, computer enhanced technology is light years ahead, and makes for a experience just not possible with the old analogue system.

So, if you are in the market for assembly ideas, here is one for you! There are many possible themes for school assembly ideas, but there is only one Sky Dome Planetarium (oh, OK, we have several ... but they are all identical!).

It may not be the same as watching Mr. Armstrong descend those famous final steps to set foot on the moon, but it is just likely to be enough to inspire the next generation that may descend a similar ladder to walk on the surface of Mars. And if not, at the very least, your entire school will have a ball.

How cool is that?